Gravity is a brand that everyone within the mountain biking industry should be aware of by now, they have been chipping away in the background for many years now.

However it is only fairly recently that they have made their claim at the pinnacle of the manufacturers.

When you first spend some time looking at the specification that this model offers riders you will likely be blown away with the technology that they have managed to cram into a bike for this price. 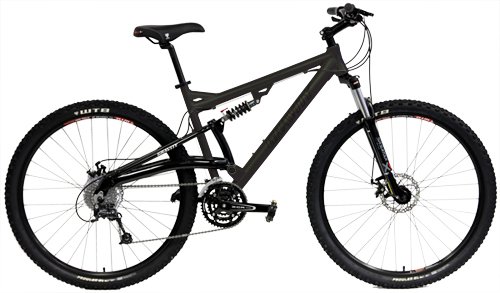 “The Gravity FSX series has always impressed me and the FSX 29one is another example of this. It has everything the novice rider could ever require and so much more, a truly exquisite ride!”

”There is so much more to this bike than its gorgeous aesthetics, it is one of the best all rounder mountain bikes available for under $1000!”

Firstly I think it is crucial to look at the aluminum frame that they have used as the base for the FSX 29 One. It is crafted out of a unique 6061 heat moulded form of aluminum that is extremely resistant to both damage and vibrations.

Similarly, due to the thing cut, the bike weighs surprisingly little given its size. One note on the size is that you can actually purchase the Gravity FSX 29 One in a selection of different sizes, currently they offer 15, 17, 19 and 21 inch model variations – with more likely to hit the market in the near future.

The frame is an over-sized bearing CantiBeam that has a single pivot. It has been hand welded with a TIG joint, front based triangle with some hydro-formed tubing too.

The FSX 29 One has a pair of SunTour 29er XCT V4 suspension forks that do a brilliant job of reducing the vibrations felt on a bumpy road. Similarly, the rear suspension is based around a KS Axis CoilOver that massively aids the damping force.

Gravity have stuck with Shimano for proving the gearing system for the bike, it comes with a set of Shimano Alivio 9SPD easy shift triggers with a Shimano Alivio front derailleur and Shimano Deore rear derailleur.

Together with the SunTour XCR crankset you can expect to never face any gearing difficulties on the road or on an off-road trail too.

These are tried and tested components that never fail to do an excellent job and shifting between gears on the FSX 29 One is seamless as you would expect. The braking mechanism is centered upon a Tektro Novela mechanical disc brake on the front and rear wheels.

The Tektro levers are ergonomically designed so that they fit all shapes and sizes of riders’ hands. I can’t ever imagine this bike having difficulty coming to a stop due to the extreme stopping power offered here.

I was pleasantly surprised with how well everything seemed to come together on the bike, I didn’t really have too many complaints which is always quite surprising for me.

Then again, I have never purchased a bike from Gravity and thought any different – they always seem to do a particularly good job at getting high levels of performance out of their products at truly modest price points.

I think that the Gravity FSX 29 One is a great mountain bike for beginners and seasoned riders together, it is great for city riding as it is for off road riding too.

You will quickly see that this bike is a great all rounder and is capable of tackling any road or path, anywhere in the world. It is lightweight, reliable and cheap – what more could you possibly require.