Schwinn Hinge Folding Bike Review 2023: What I Didn’t Like

This is our review of the Schwinn Hinge folding bike, a budget-level folding bike by the veterans over at Schwinn.

Schwinn was founded in 1985 in Chicago, it has persisted as one of (if not the) most popular American bike manufacturers to this day.

The company has truly revolutionized the folding bike industry over the years and looks in place to continue that trend well into the future too. 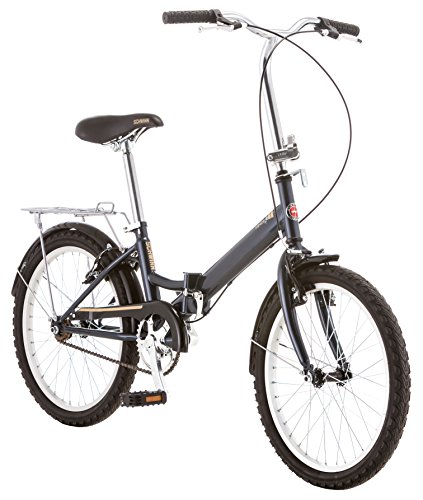 “I wouldn’t personally recommend purchasing this bike unless you are seriously strapped for cash. There are better entry-level folding bikes for slightly more money.”

”It is difficult to criticize a folding bike that costs so little, however, we believe you would be better off spending a little extra on a slightly more refined entry-level bike”

The Schwinn Hinge is made using the popular 20″ wheels associated with the majority of folding bikes that are currently available. It is one of the cheapest Schwinn folding bicycles that you will find absolutely anywhere in the world.

For this money, you are getting a fully functioning bicycle that has little more than the basics, as you would expect.

My initial impressions of the Hinge were that it looks like a more premium-priced bike.

Nothing about how it looks screams that it is a cheaper model, which is great. One of the initial issues we determined was that the bike is pretty heavy and quite bulky too.

It is a nightmare to carry around with you as stock and certainly requires further investment to prevent the handlebar and wheels from moving around.

I did find that because it weighed so much it was quite unpleasant to carry around for prolonged periods of time.

Furthermore, the Schwinn Hinge takes a fair amount of time to fold away too, it took us just over 25 seconds in fact.

This is not the worst that we have seen, however, it is quite a lot longer than the more premium bikes around that can do this in less than 15 seconds.

The bike lacks gears and so its single-speed is only really useful throughout urban environments that lack hills.

One thing I will state is that the bike is by no means slow, you can get up to speed quickly on this model and there isn’t much between it and other folding bikes around.

The wheels have a relatively good grip, at no point did I feel like they were struggling, however, I didn’t test the bike in the wet.

I decided to take my normal route for testing bikes that boasts a large hill to climb.

The Schwinn Hinge did in fact make it to the top, but it was extremely tiring and the single-gear setup really did struggle.

As for the brakes, the Schwinn Hinge has some fairly decent brakes on it and I had no trouble coming to a halt at any point.

I will say that they were quite stiff, to begin with, I managed to wear them in quickly though and from then on had no issues whatsoever.

Overall I think that the Schwinn Hinge is a good bike for the price.

I certainly wouldn’t recommend purchasing it if you can afford to stretch your budget a little further. There are considerably better folding bikes around for slightly more money. I genuinely believe that the Montague Navigator is one of, if not the, best folding bike for commuting. It’s a fairly expensive model, but due to the fact that..