This is our review of the Dahon Vybe D7 folding bike, a lightweight Aluminum framed folding bicycle that is designed to have a retro design.

Straight out of the box we were very impressed with the bike aesthetically.

It really does look quite sleek on the road and is absolutely guaranteed to turn heads.

The Vybe D7 was designed with comfort and functionality in mind, and this is something that is delivers exceptionally well.

Not only this, the bike comes with all the other features of top end folding bikes too, quite the feat in itself. 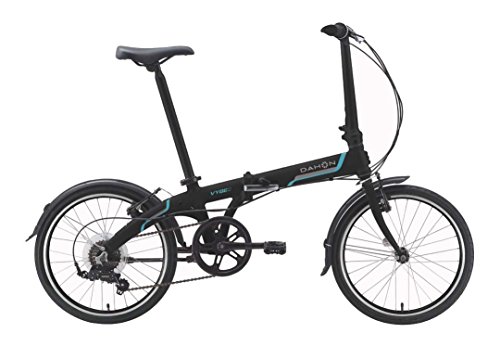 “Another well rounded folding bike by Dahon, the Vybe D7 does everything you can ask of it. This 7 speed bike performs beautifully across various different types of terrain, for the money there is little better out there!”

This bike is a new addition to Dahon’s aptly named ‘recreation collection’.

“A true all rounder, the Dahon Vybe D7 performs well in a wide range of challenging terrains and in the wet too. A well built folding bike that is definitely not one to turn your nose up at!”

One of the features of the Vybe D7 that we were most impressed with was the derailleur in use (Shimano FT35), this efficiently moves the chain through gears and promotes rapid shifting.

The other most prominent feature that the bicycle boasts is the minimal size it takes up when folded away.

Dahon have done a fabulous job in this department (which is ultimately one of the most desirable ones!), the bike takes up very little room and is sturdy when folded away.

In addition, the Dahon Vybe D7 also folds down in less than 15 seconds, which is faster than many other folding bikes around.

The bike weighs just over 26lbs which is pretty average, but certainly not too heavy to carry around with you on your commute either.

Yes, there are lighter folding bikes out there, but you will be paying considerably more for the privilege of using these models.

The bike has 7 gears, while this is not as many as some of the other more premium models, we have come to recognize that the additional gears do not offer too much extra performance.

The bike handles perfectly on flats throughout the city and is more than capable of tackling hills too.

It comes with a premium braking mechanism that the Dahon brand has become synonymous with over the years.

One issue we found was that it was difficult to adjust the height of the bike quickly, this obviously is not an issue you have to deal with on a regular basis, however it is something that would grate on me if I was regularly fiddling with my bike.

All in all, the Dahon Vybe D7 is a brilliant folding bike for the money.

It comes with all the typical features associated with mid-range folding bikes, but is refined to a high level in all departments too.

There are not too many bikes around that can compete with the Vybe D7 for less money, plus it is quite a stunning bike to look at too.

Check out our other Dahon folding bike reviews today.