As with all of STRiDA folding bikes, the STRiDA SX is truly in its own class when it comes to design.

I personally am not the biggest fan of these A-framed folding bicycles, however many people in the community are. These revolutionary bikes truly demand attention whether on the road or off it.

Straight out of the box I found myself slightly frustrated with the bike, it took approximately thirty minutes to actually get the bike set up and ready to go on the road. While this is clearly something you will only be doing once, it did bother me slightly. 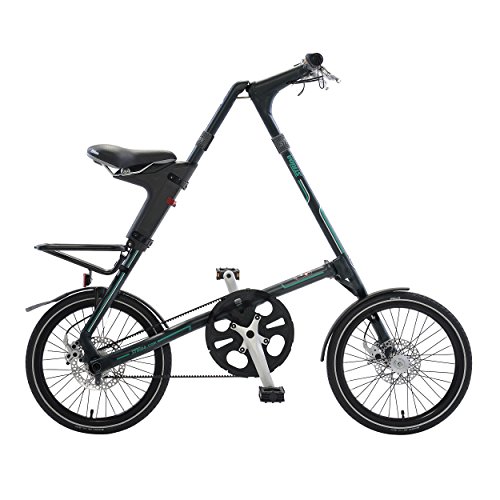 “Another unique but ultimately unimpressive folding bicycle by STRIDA. Unless you are completely set on purchasing an A-framed folding bike, I would recommend steering clear of the Strida SX.”

”I personally am not the biggest fan of these uniquely styled folding bikes, however they are fully functional and well built models so are certainly worth having a look at!”

One of the biggest selling points of these folding bikes are their capacity to be folded down and away in under 10 seconds. I personally clocked it at 7 seconds exactly, however many videos online have shown that this can be done in under 5 with some practice, quite the feat in itself. All that is required is a slight adjustment to the safety lever, this unlocks the front wheel and enables it to be rapidly folded down.

The STRiDA SX boasts some powerful magnets to hold the bike together when folded away, it can then be rolled around in its stick like shape – particularly useful when considering most folding bikes need to be carried. Not only that, but STRiDA’s models also have a much lower storage footprint, they take up a very minimal amount of space.

The STRiDA SX has slightly larger 18″ wheels than the 16″ wheels that are typically associated with their bikes – however, these are still smaller than the 20″ wheels that can be found on most folding bikes. Smaller wheels are generally slower and less stable than larger ones, we did notice this slightly, but it was never a significant concern whilst on the road. The SX weighs in at 22lbs and so is relatively easy to accelerate on, the top speed is comparable with most too, so you wont be lagging behind on the road at all.

Another brilliant addition that the STRiDA SX folding bike has is a kevlar drive belt which has no oil on it whatsoever. Your clothes are therefore at no risk of becoming dirty and also it is far more reliable than having a chain too, you won’t be replacing your belt any time soon, unlike some of the cheaper chains around.

Unfortunately this bike only has a single speed and so, in combination with its smaller 18″ wheels, it is not the quickest bike on the road by any stretch of the imagination. It struggles up hills and it also isn’t the most comfortable ride around either.

If you’re not bothered by the shape of this bike, and its low speed on the road. Then for the price this isn’t a bad bike to go for, however I believe the masses would prefer a more generically styled folding bike.